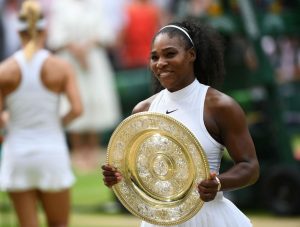 Julian Finney—Getty Images Serena Williams celebrates after winning the Final of the Ladies Singles against Garbine Muguruza of Spain during the day 12 of the Wimbledon Lawn Tennis Championships at the All England Lawn Tennis and Croquet Club in London, England on July 11, 2015.

TIME columnist Abdul-Jabbar is a six-time NBA champion and league Most Valuable Player. He is also a celebrated author, filmmaker and education ambassador.

We need to rethink our ideals of female beauty

Serena Williams won her 21st Grand Slam title at Wimbledon this month. This marks the 17th time in a row that she has defeated Maria Sharapova. Yet Williams, who has earned more prize money than any female player in tennis history, is continually overshadowed by the woman whom she consistently beats. In 2013, Sharapova earned $29 million, $23 million of that from endorsements. That same year, Williams earned $20.5 million, only $12 million of that from endorsements. How’s that possible? Because endorsements don’t always reward the best athlete. They often reward the most presentable according to the Western cultural ideal of beauty.

I know, you think this article is about racism. It’s not.

Misty Copeland just became the first African-American woman to be named principal dancer at the American Ballet Theatre. But when she was 13, she was rejected from a ballet academy for having the wrong body type. As an ad featuring Ms. Copeland put it, summarizing the responses she received early in her career: “Dear candidate, Thank you for your application to our ballet academy. Unfortunately, you have not been accepted. You lack the right feet, Achilles tendons, turnout, torso length, and bust.” At 13? That criticism of her body being too muscular and “mature” has followed her throughout her career. “There are people who say that I don’t have the body to be a dancer, that my legs are too muscular, that I shouldn’t be wearing a tutu, that I don’t fit in,” Copeland said in response.

What do these two highly successful athletic women have in common? They seem to endure more body shaming than their white, less successful counterparts.

(Still not about racism.)

In her novel, The Bluest Eye, Toni Morrison writes, “Along with the idea of romantic love, she was introduced to another—physical beauty. Probably the most destructive ideas in the history of human thought.” Morrison’s assessment of social ideals for physical beauty as destructive is harshly accurate. We have established a definition of beauty so narrow that almost no one can live up to it. Women struggle to fit within the constrictions of social expectations of thin, youthful, sexuality as constricting as a Victorian corset. We display these paragons of beauty from billboards and magazine covers and Victoria Secret ads with the full knowledge that because of the use of photo-enhancing, lighting, makeup, and other morphing techniques, the women shown are as real as the CGI-created Hulk in the Avengers movies.